Articles in this topic (Envisioning)

Despite the odds the conversation must continue 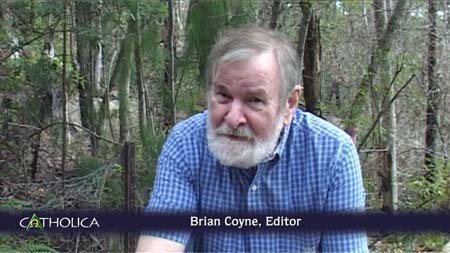 These are important questions CCRI raises (Newsletter, 12 July 2016) that I’ve been trying to get my head around for perhaps a decade or more, even discussing them quite a number of times with Bob Kaiser. In our country (Australia), and in new statistics released today for Germany [LINK], 90% of the adult baptized have ceased participating and listening. They don’t write letters of protest to bishops, or the pope, as they see that exercise as a complete waste of time, energy, even the cost of a postage stamp. It is seen as absolutely futile as they appear to have learned a long time ago that the hierarchy are only listening to a small “remnant element” who want to undo completely the insights of Vatican II. The recent Life-Site video which you may have seen which has been sent to Pope Francis and the 218 active cardinals in the world are the sort of people the rest of us are competing against. If you haven’t seen the video we’ve uploaded a copy of it on catholica

All of us who have been fans of John XXIII’s vision and that which the bishops of the world collectively discerned at the Second Vatican Council have been trying to push the proverbials up a hill with a pointy stick in the decades since compared to that small remnant and very insecure element in the Church who have worked themselves into a frenzy to “reform the reform of Vatican II”. More importantly that is where “all the money” is — and this was encouraged by the late sainted Polish Grate who set up and encouraged all these conservative “new movements” who believe, sincerely, they alone are God’s “chosen ones” and whose principal agenda is unwinding all the “modernist heresies” and “arty-farty liturgical innovations” that they believe Vatican II represents. These people are petrified at what they see going on in the world and some of them are very wealthy and have largely been funding the hierarchs and the institution for decades. The late Fr Marcial Maciel Degolado turned it into a lucrative art form climbing into the pockets of some of these people that long ago, St Jerome labelled as “the rich ladies”*.

Given that around 90% have ceased participating, you would rationally think that the supporters of the forward-oriented vision of Vatican II had the personnel, and more especially the financial resources, to counter these small, totally obsessed but insecure and paranoid individuals who really do believe (a ) the sky is about to all in; and (b ) that they literally are “the chosen ones” with exclusive insight into the “mind and rules of Almighty God”. One might have thought that in the 90% who have ceased participating in nations like my own, and those of the original nursery of Christianity, Europe, that many who have done well in life would have been enthusiastic philanthropically in supporting pro-Vatican II, forward-oriented, counter initiatives to those sponsored by the conservative and reactionary elements. Why hasn’t it happened? All the so-called “reform groups” I’ve been associated with or known over the decades all “struggle at the margins” financially with what are basically “enthusiastic amateurs” — and I include myself in that. The vast masses who have dropped out of participation do not work themselves up into a frenzy that their Church is dying, or has been stolen from under their feet, or that it is today largely controlled by the agendas of groups like Opus Dei, the Legionaries of Christ, and the similar “new movements” so loved and supported by the last two popes. Can Francis make a difference and turn all this around? Or is it all “too little, too late” — too much damage has now been done over the last half century since Vatican II — and even if Jesus himself returned to lead the Church on earth again the pharisee element would excoriate, torture and crucify him all over again for his “heretical views”?

I ask each of you to look back over the past half century since Vatican II...

The original opponents to the majority of bishops at the Council were a tiny minority. You have to give it to them though, they had “fire in their bellies” to ensure that the vision discerned by that majority of bishops was completely over-turned. Also look back over the past half century of the huge expenditure of energy of that other “minority” who were genuinely and deeply energised by the vision of the majority of those bishops, ourselves. Who has “won” the competition? My sense is that we, on the side of the forward-oriented vision of Vatican II need to do some hard thinking and not merely repeat the failed endeavours of the past half century. As a priority we need to make connections with the elements whom Providence has blessed in this now large sector who have left who might help fund alternatives to the sort of initiatives so lavishly funded by the “new movements” and the small remnant population on the other side. I do know Bob Kaiser had been endeavouring to do this before he departed this life.

I’m not entirely pessimistic about what is happening. While institutional religion might be dying; while it might be the final end of the once mighty Holy Roman Empire; I am actually very optimistic about the long term future. The young people I meet today who are the potential leaders of the future have not been sucked in by the remnant elements. (Certainly a small element of them have but that only proves that “fear and anxiety” are not totally age-dependent factors.) I honestly believe the “ascent of humankind/the civilising of creation/the building of the kingdom/ the great ‘convergence towards the Divine’ envisioned by Teilhard de Chardin” will continue. Karen Armstrong suggests we are entering, or have entered, the Third Great Axial Age of Religion. I have a sense this very intelligent dame calls it correctly. We may have to be patient as the civilising of humankind, or human evolution, has always been a “100 steps forward process followed by 99 steps backward” to advance a single step. There are many signs, in the political sphere as much as the religious, that we’ve entered a “99 steps backwards” phase of our evolution. There are a lot of very anxious people in the world at the moment and there are plenty of “snake-oil salespeople” emerging out of the woodwork, as they always do, to feed off the fears of these people in their own quest for power, notoriety or wealth.

In the long-term picture I remain totally optimistic that the “ascent of humankind/the ‘convergence towards the Divine’” will continue. It might be a generation not yet born, or even thought of, that ends up “writing the new script” but we should not lose hope, or our own faith. I sincerely believe one of the greatest insights of the Second Vatican Council, the insight that really does prove it was a “movement of the Spirit” in human affairs, is that it really did foreshadow this over-arching trend in human affairs whatever the scaredy-cat elements in the Church, or in society, might think, or do.

We need to remember that those two and a half thousand plus bishops who were called to Rome at the behest of Pope John XXIII were largely very conservative individuals. That had been the culture of the institution for centuries. They were not “revolutionaries” yet, the miracle is, they did discern what was effectively a “revolution” in religious thinking and theology — how we are to relate to this One, this Divine Mystery, we label as “God”; and how we relate to one another including all the people of other faiths who have “come to know the Divine” by different pathways to ourselves. That observation alone – that a huge bunch of basically conservative men came up with such a revolutionary vision – proves to me that this Council can honestly be described as a “movement of the Holy Spirit” in our human affairs.

We should not lose heart. I honestly believe what we label as “the spirit of Vatican II” will eventually prevail even if it our great or great-great grandchildren, who don’t even remember the term “the Second Vatican Council” eventually write the new script.

I support this new initiative you have put forward. I believe we do need to “continue the conversation” — and that’s what we’ve been endeavouring to do in our own small way with catholica for the past ten years (we celebrate our anniversary on 3rd August coming). As a priority though I would also urge all involved in the various “reform, or Vatican II movements” that we need to reach out and find the people whom Providence has blessed, and who might have a philanthropic spirit and the resources to fund initiatives like the many so lavishly funded by the insecure, anxious remnant elements who have largely negated the forward-oriented vision of Vatican II over the last half century.

I honestly believe all of us are privileged to be witnesses to one of the most exciting moments in all of human religious history. There are a lot of people in the world living in fear and dread at the massive changes going on in the world at the moment — from the threat of climate change; to the massive changes in our global economics and the threat to jobs posed by new technologies; even the export of many of the mundane jobs to low-labour cost, third world countries; the rise in religious and political fundamentalism and terrorism; to the rise in domestic violence at the local level and the increasing breakdown rate in human relationships and the rise in mental illness statistics in the first world — but we need to remain strong and confident that eventually that “forward-oriented spirit of Vatican II” is the one which will prevail.

*"All their anxiety is about their clothes.... You would take them for bridegrooms rather than for clerics; all they think about is knowing the names and houses and doings of rich ladies." ...Saint Jerome (c. 347-420) about the Roman clergy

More on departures from the Catholic Church - Bishop John McCarthy

"One of the most common reasons articulated is that they do not see the Catholic Church as a loving community of faith striving mightily to bring truth, justice and love into the world. Rather, in their opinion, they see a very large organization in which most individuals become isolated and this organization is controlled by a group of leaders that are insensitive to the needs of the people, who are seen to be more concerned about exercising power and control than a generous concern for all."{jcomments on}